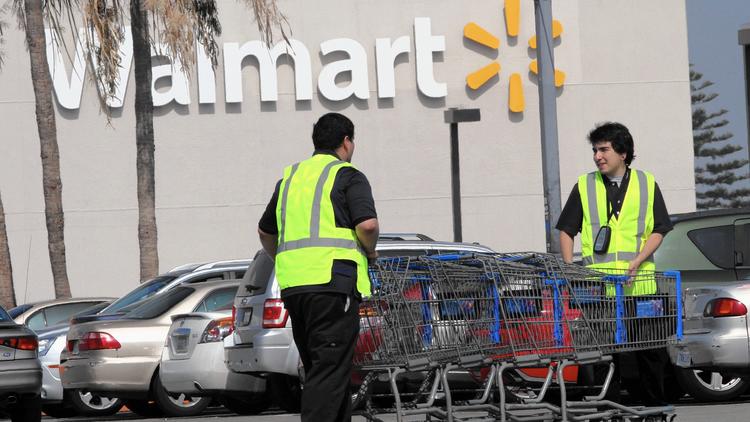 Wal-Mart’s advertising slogan is “Save money, live better,” but for years the world’s largest retailer has been criticized for not paying its workers enough to do that.

Now, facing rising minimum wages in California and other states, competition for employees and a poor corporate image, Wal-Mart Stores Inc. said Thursday it would raise the minimum pay to $9 an hour for nearly 40% of its U.S. workforce.

The action is a major milestone in the growing movement to lift the pay of the nation’s lowest-paid workers as the gap between rich and poor has widened. It’s also a nod to a strengthening economic recovery in which the labor market has expanded by more than 200,000 jobs every month, giving workers more choices.

Advocates for low-wage workers cheered the news after years of pressuring the company to raise wages. But they said the pay increases fell short of what workers need and demonstrated that the federal minimum wage needs to be raised.

Starting in April, about 500,000 Wal-Mart employees will get a raise to the new level — $1.75 an hour more than the federal minimum wage — as part of major changes to the company’s hiring, training, scheduling and compensation programs. Next February, current employees will receive another raise, to at least $10 an hour.

“We’re always trying to do the right thing and build a stronger business,” Chief Executive Doug McMillon said in a letter to employees. “We frequently get it right, but sometimes we don’t. When we don’t, we adjust.”

The changes will bump up the average hourly wage for a full-time worker to $13 an hour from $12.85, the company said. In addition, the company said it is raising the caps on pay ranges for jobs, giving hope to those in states such as California where the minimum wage already is $9 an hour

Juanita Cason, 24, for instance, makes $9.40 an hour at the Baldwin Hills Wal-Mart, and a bump to at least $10 would help the single mother provide for her infant daughter, Zah’Mya.

Moreover, Cason said as she arranged pink scooters near the store’s toy area, “it would make it worth it to be here.”

But higher wages for low-income workers lead to greater productivity, said Justin Wolfers, a senior fellow at the Peterson Institute for International Economics.

“You know the old saying ‘Pay peanuts, get monkeys’? If you want better than monkeys, you’ve got to pay a little bit more,” he said. “Paying above the minimum wage is by no means a radical step.”

The pay raises make sense for Wal-Mart, which will save money by not having to train new employees continually because of turnover, said Craig Johnson, president of Customer Growth Partners.

“You can never go wrong in retail by treating both customers and employees well, because your shareholders get treated well too,” he said. “If you need proof, look no further than Costco.”

Costco Wholesale Corp. has been praised by President Obama and others for starting workers at $11.50 an hour. It’s one of many companies, including Trader Joe’s and the Gap, that pay well above the federal minimum wage of $7.25.

Wal-Mart’s move could pressure low-wage competitors to increase wages too, Johnson said. But the effects could be limited.

“Target may be affected because their pay scale is more similar to Wal-Mart,” he said.

“But I don’t think people will leave good jobs at Safeway or Kroger to jump over to Wal-Mart.”

Wal-Mart, which has 1.3 million U.S. employees, has been under intense pressure from organized labor groups to raise its starting hourly wages and provide workers with more consistent hours. Employees held rallies and marches nationwide last year, highlighting the low pay.

The company’s image has taken a hit. Its rating fell 4% last year and ranked last among department and discount stores, according to the American Customer Satisfaction Index results released this week.

“We are so proud that by standing together we won raises for 500,000 Wal-Mart workers, whose families desperately need better pay and regular hours from the company we make billions for,” said Emily Wells, a leader of Organization United for Respect at Walmart, an organization of employees that advocates for better wages and hours.

She said, however, that the company could afford to pay its workers $15 an hour.

Sanders Mosley, 26, who works at the Baldwin Hills store, echoed that sentiment: “Ten dollars is pocket change. Give us a little love.”

Obama and many Democrats want to raise the federal minimum wage to $10.10 an hour.

Six in 10 Americans favor a higher minimum wage, according to poll results this week from the Associated Press and GfK Public Affairs.

But Republicans and some leading business groups oppose the move because they said it would lead companies to cut their workforces.

“Wal-Mart made its decision based upon what is best for their employees, their customers, their shareholders and the communities in which they operate,” the National Retail Federation pointed out, and there was no need for the government to mandate pay increases.

The White House said Wal-Mart was following a national trend in acting on its own to boost pay because Congress has failed to raise the minimum wage.

“Today’s announcement is another example of businesses, along with cities and states, taking action on their own to raise wages for their workers, recognizing that doing so can raise productivity, reduce turnover and improve morale,” White House spokesman Eric Schultz said.

Congressional action to raise that base has been stalled for years. The wage hasn’t increased since 2009, and now, 29 states and the District of Columbia have minimum wages above the federal standard, and seven of them are at $9 or higher.

Some cities, such as San Francisco and Seattle, have even higher minimum wages. Los Angeles Mayor Eric Garcetti wants to raise the city’s minimum wage to $13.25 by 2017.

All About SharePoint, InfoPath, and SharePoint Designer!